Sorry to be AWOL so long. It wasn't intentional. Mr. B was home for a couple of weeks, only going back to work last Monday. Unfortunately, despite my best intentions, starting to write again got bogged down in a time suck that  began with working at Manna Monday, followed by two days spent in attempted and ultimately successful car repair. In the middle on Wednesday came my birthday. Sadly, it's not nearly as much fun as during childhood, when getting older sounds like the greatest thing since ever. Anyway, I thought I'd share some of my birthday booty with you. 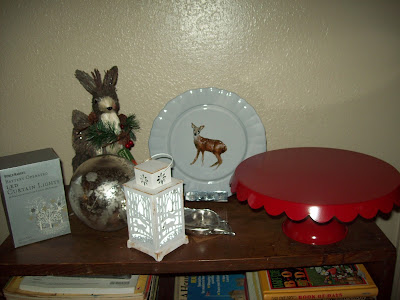 A new World Market opened nearer us and Mr. B took me for a shopping spree there on Saturday. Several things were in the marked down from Christmas section, the deer plate and little deer with a wreath around his neck, the lantern and lights in the box. The cake stand was impossible to resist, between the color red and scalloped edge. Lying down is a cool heart-arrow tea strainer I'm hoping to do something with during February, and the Mercury glass ball is timeless, imo. 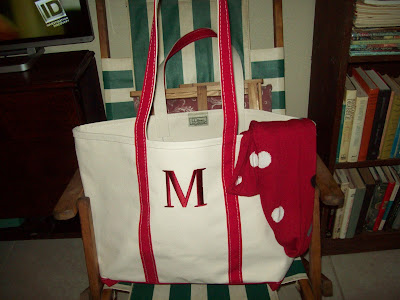 A daughter sent me the cool monogrammed tote with long handles from L.L. Bean and the circular scarf from Talbot's is from my friend Tricia. It's not draped so you can see, but it has other colored dots too, that coordinated beautifully with the gray dress I wore to church and out to dinner yesterday. Thank all my family and friends who offered such lovely distractions from the fact of growing older. Wait, that might should be from becoming officially ancient!

Have a good one.