Is June a busy month for your family? Ours has no birthdays or anniversaries this time of the year; no one is getting married or graduating in 2012 either, so it's fairly quiet here. It's  good to stay inside and hide from the heat and humidity except in early morning or evening if possible. Because the heat is extreme for so many months of the year, my usual habit is to run errands as early as I can and get home before it cranks up in the afternoon. A lot more time should be spent cleaning and organizing, but it's hard not to succumb to the lure of books--maybe  a throwback to childhood and the library book club each year? I went downtown to the Central Library and got a huge load Wednesday, so am set for a while. I read mysteries and fiction mostly, with occasional forays in essays or nonfiction. This summer also has been the start of a re-read of Susan Wittig Albert's China Bayles herb mysteries. The first one was published in 1992, so the early books in the series are but dim memories. I really like this writer (she's from Texas!) and the way the main character changes  and develops through the years. Other favorite Texas authors of mine are Bill Crider, Susan Rogers Cooper and Leeann Sweeney. 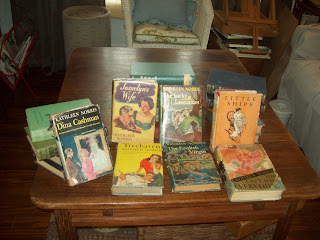 I get recommendations from friends, GoodReads, Amazon and by sheer serendipity. Finding a new author whose work is wonderful; it feels like hitting the jackpot at a casino. Or maybe not--I'm not a gambler but it seems a similar whoo hoo moment. Yet when all is said and done, it's hard to beat old favorites, the ones you've read over and over till they're practically memorized. I have a lot of those. One author I've been reading and collecting for decades is Kathleen Norris. Not the one living now who writes on theological issues, but the one born Kathleen Thompson in California in 1880. She later married Charles Norris, brother of Frank Norris.They are captivating romances in part because she was great at writing descriptions. Above is a small part of my collection of her books. Most are in a plain black "Triangle" edition hardback, but I've found a few with wonderful vintage covers. She wrote over 80 novels, numerous short stories and was the highest paid female author of her time, selling over ten million copies of her works. Her works could be considered unbelievably old-fashioned by a younger generation, yet still have enthralling characters and engrossing plots.

With only seven titles, the Williamsburg books by Elswyth Thane are fewer in quantity but offer a captivating look at two families who meet and intermarry before the Revolutionary War through the generations; the last title takes place during WWII. Gripping characters in difficult times and places are the rule for Thane. 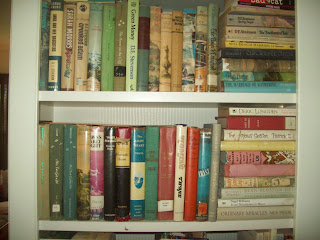 The second shelf holds the Thane books. The first one is home to another old favorite, D. E. Stevenson. This Scottish writer wrote gentle stories of people mostly set in Britain. Some of the characters appear in more than one book. She wrote around 45 novels and I own 30. They are great comfort reads when life is difficult or you're felled by illness. I especially like the series about Mrs. Tim, written in diary form about the life of a woman with a husband who is a career army officer and the books about Barbara Buncle, which start with Miss Buncle's Book. Her adventures continue in Miss Buncle Married and The Two Mrs. Abbotts. Some of these have been recently reprinted, so perhaps they will introduce dear Dorothy Stevenson to a new generation. Like Miss Read, her books are full of engaging, endearing characters with interesting challenges and quirky friends and relatives.

Other long time friends are Elizabeth Goudge, E. M. Delafield and Nevil Shute, Betty MacDonald and Laurie Colwin. Who are your author friends, never met outside the pages of their beloved works? Do you keep books you re-read or ruthlessly divest yourself after the last page is turned?

I didn't know Susan Wittig Albert was Texan! I enjoy her Beatrix Potter mysteries, although I've yet to read the most recent ones. I dipped into a China Bayles and couldn't get into it - perhaps I should try again from the beginning (that usually works better for me than starting in the middle of a series).

I love getting new recommendations for things to read. The D.E. Stevenson books sound lovely and I'll have to see if I can find them at my local library.