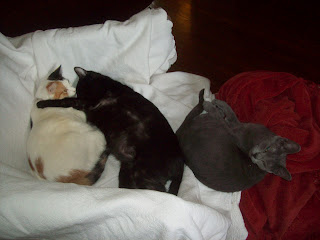 I'd planned to do more blog posts this week, but life got in the way. Wednesday the morning was spent taking Freddy to the vet with a turnaround after returning him home again to go directly back to the Target in the same center. Freddy is the black kitty in the middle. By the time the errands were finished it was afternoon, when it dawned on me that hmmm, the house seemed awfully warm. That was because the ac had quit working. Sigh. A repairman came out and worked, pronouncing it fixed. Except we woke up the next morning and it was hot as ever. Thursday was spent trying to move as little as possible while waiting on his return, which didn't happen till late afternoon. This time it  was more successful, and the house is cool again, thank goodness! Friday was spent playing  catch up on laundry and other chores abandoned in the heat, so no decorating or crafting got done, but an effort from the long weekend is shown below: 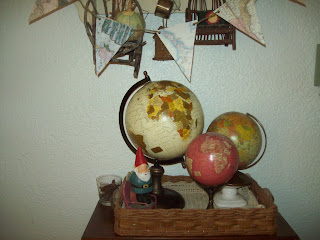 I have a modest collection of globes and used a few in this small display. The banner is made of vintage maps from an old calendar. The top of this small chest isn't large enough to include the larger, full-size globes, but these seem like a fun way to celebrate the summer season of travel. Who knows where that gnome plans to roam? Do you have plans to see the country or the world this summer? What getaway appeals to you most, a visit to relatives, a cabin in the mountains or cottage on the beach? Or will you stay closer to home and go on mini-trips?

Michele
Posted by Michele at 9:44 AM

Love your globes - I've wanted to collect them, but so far, I have resisted. I have too much stuff, as it is!! I love to travel with Europe being my favorite destination, but I went to Germany & France last summer; so I have to stay home this year. I can look out my window and see the Rocky Mountains; so home is pretty special any way. Thanks for stopping by my blog. Sally

Thanks so much for visiting my blog Michele! I love looking through your collections...what a treasure trove! By the way, I really like your pink globe. I've never seen anything like it. Have a great week! :)

Dear Michele, I loved your globes!!! I am also attracted to them, but so far did not find a vintage one...
I am from Brazil so I go visit my family every year for Christmas. But my favourite trips would be the ones close to home in British Columbia, Canada... I also love to stop in little shops along the way...

Hi, Michele
Thank you for visiting my British Invasion post. I am your newest follower. Things that attracted me to your blog: rescued pets (we have 2 dogs and 2 cats); the birdcage vignette in your header (love the succulents in the little chairs - it looks like a hotel for birds); the globe collection; but mostest, mostest you are a true devourer of books, not just a reader!

Your motto should be : I was living until life got in the way!

I'd collect globes too if I could find some as amazing and unique as yours. You're lucky to have found such different ones :)