Happy May Day to everyone!

Last week some of my miniature chairs were featured in a post. Now it's time to confess, it doesn't stop with miniatures. I also have accumulated a number of child-sized chairs over the years. Here they are hauled outside on the front steps to photograph: 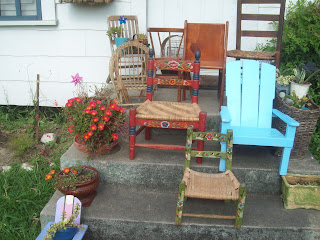 These have been collected over a long time, most from thrift shops but a couple from Ross and TJ Maxx. Those are the folding chair and bent twig ones at the back left. The taller one on the right is an early Texas primitive bought from The Guild Shop run by volunteers from St. John the Divine church. It probably cost more than the others, but it's been nearly 30 years since it came home  with me and memory of the price is long  gone. Two little maple wooden ones came from The Bluebird Shop and Sand Dollar. Also from SD is the green decorated one in front. It's red big brother was $5.00 at Manna a few months ago. The small Adirondack chair was red with the name Katie on the middle slat. It needs a second coat of blue still. 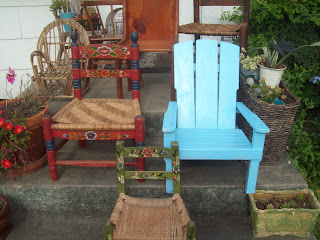 The folding chair sits to the left of the front door on the steps with a  birdcage full of succulents on its seat. The others are  all used inside, including one not in the picture. It's on top of a high bookcase, being used as an extra shelf to hold some ornamental tins. It is a plain light wood with rush seat from Ikea.

Inside the little chairs hold vignettes, stacks of books and seasonal decor. 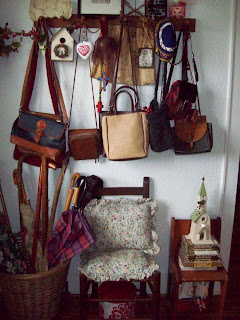 Here you can see a couple of them right inside the front door. The primitive chair has little cushions from the child's section of Ikea, bought long ago. Recently it has become a favorite spot for Freddy, one of our youngest cats to snooze on during the day. Most of the time the little green painted chair hangs on the pegs on the rack above.

It's hard to say why these small seats speak to me, but they always have. It's been fun to find them over the years and figure out how to incorporate them into our home. Plus, we're ready for a tea party; just say the word!

Great post, Michele! I enjoyed seeing your collection of child-sized chairs, all rounded up together. I think the red one is my favorite. Your pots of flowers also look great!

you have a lovely collection!

Thanks for stopping by. Like you, I have a thing for chairs too but I had to stop myself; the garage was bursting at the seams. I love your miniature collection though. Perhaps that's the way to go.

Tammy @ A Walk in the Countryside said...

I like your collection of child size chairs. I still have my children's little chairs from when they were little. Thanks for visiting my blog! Blessings, Tammy

Lauren @ My Wonderfully Made said...

Great collection! I love that blue Adirondak chair and it's good that they're 'small' . . . you can collect MORE that way, right?

Hi Michelle! Thanks for stopping by my blog. I want that blue adirondack chair for the backyard!

I have a soft spot for small things - I totally get this collection! So far we have only two small chairs at our place. A rocker and a comfy chair. Very cute :)

Hi Michelle! You have a good collection of little chairs, my favorite is the blue and the ones at the top left.
Blessings, Cristina

Oh, my youngest daughter and I share your love of "little" chairs. You've got quite a collection, but my favorites are the painted Mexican chairs.

Hi Michelle, great post. I'd love to hear if you decide to distress your adirondack. It's adorable as is!

Love your collection, now you have me thinking...maybe I need to collect mini chairs :)
Debbie

I just came across a few little seats and didn't see the possibilities...next time, I might just take one home!