The Yard Sale that Changed My Life

First, there is a bit of a preface to this entry. I learned to read so young I don't remember not always being able to.  We went to the library weekly, and once I was school age, there were two libraries to check out books from, what riches!

Now, back to our regularly scheduled blog post. In 1993 or so, Mr. B and I stopped at a yard sale in our neighborhood. I picked up a couple of small, inexpensive items. In order to make the total an even $2.00 (I said they were inexpensive!) I grabbed three issues of Victoria Magazine, which was new to me. Later on, flipping through one issue a small, three or four line paragraph caught my attention. It described how the writer Anna Quindlen, had spoken about a series of books by Maud Hart Lovelace and included information about a group made up of fans of the work. Well! I remembered those books. They were about friends Betsy and Tacy: 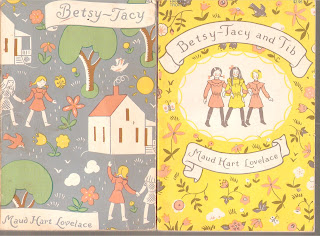 There are fourteen books in the series which begin at age five and continue through the last set during WWI, Betsy's Wedding. I had read and re-read them growing up and bought them for my daughters too.

But, a society? Who knew there were other adults out there who still recalled the details of the life in Deep Valley--actually Mankato--Minnesota? I wrote a note asking for more  information about the Society and told Daughters 1 and 2 about it. Time passed with no response. Finally months after giving up on hearing back a membership form arrived and I joined directly. Still, with the base in Minnesota and me in Texas, it seemed like a newsletter would be the only result of membership. Until one contained a snippet that there was now a BT online group. What? How does that work, anyway? In 1995, exploring the novel world of a listserv I joined and have been a  member ever since. 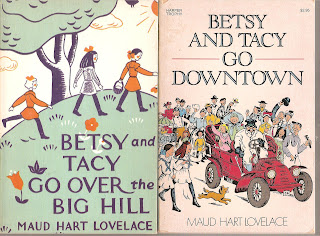 Because of joining this group I've met new friends, some nearby and others thousands of miles away, seen and shared daily and extraordinary moments of their lives. I left Texas to travel to Minnesota for a convention in 2002. There are many longtime members who mainly know me as the grandmother  of Little  Oldsmobile, based upon her name, Cierra. My ex-husband didn't think much of it and said (to me, not to her parents) "Cierra! That's not a name, it's a &%!@*$ Oldsmobile! Inspired by others who occasionally sold duplicates and other beloved books to the group I began to do so as well and eventually branched out to sell on eBay and Amazon. The world of Maud Hart Lovelace is endearing and enduring. I read many books as a child, the Little House series, those  by Edward Eager, Mary Poppins, all the Shoe book by Noel Streatfeild  I could find and hundreds of others too numerous to mention, yet Deep Valley with Betsy and her crowd have stayed with me much more so than many others. It's hard to imagine what twists and turns my life would have taken the past 17 years if we hadn't gone to a yard sale and snagged a few magazines in our haul. It's very strange to think of  my life without some very special friends, or the pleasure that's come from searching for and selling books all this time.

The moral to this story is, you really never know what will be a pivotal action or moment in your life. We went to yard sales routinely, but never really expected anything beyond a great deal once in a while and a pleasant couple of hours on a Saturday morning.  I never guessed going to one that wasn't huge and was already pretty picked over would have such a lasting effect on my life, that's for sure.

So go to yard, tag and garage sales. You might bump into the love of your life as you reach under a table to see  what's in the box below, buy an item that launches your dreams for a new career or even get a little black kitten for free. It's like an adaptation of the US Navy slogan, "It's not just a job, it's an adventure". It's not always just shopping for inexpensive items, it can be a springboard to something truly amazing.

If anyone is interested in learning more about the BTS, you can go to

I hope you all are anticipating a wonderful weekend.

What a wonderful story, Michele! I haven't had any life-changing experiences in my yard sale/ thrifting adventures, but I do enjoy them. I'll have to keep my eyes and ears open for more than the bargains now. :)