Here it is Friday again, how did that happen? Today I mostly cleaned, but have a few other things to show you. First, this conical grapevine tree with a couple of pieces of vintage trim got an upgrade: 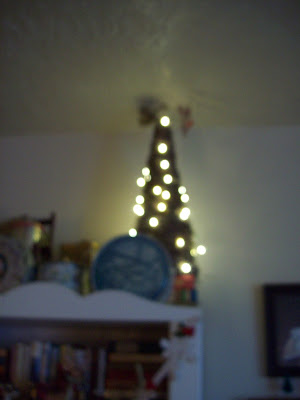 I got a box of really tiny--like the size of a match head--LED battery operated lights at Ross the other day and added them. It's on top of one bookcase.

Next, here are some thrifted gifts. For the record, they are mostly either new or look never used, so I don't feel guilty about spending less sometimes. 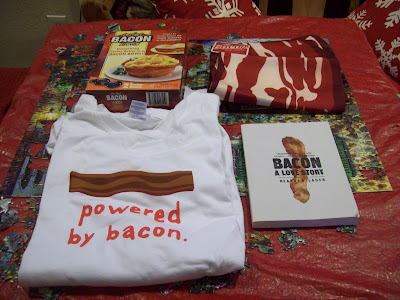 First, for my oldest son, we scored most of this at a yard sale this spring. The shirt and dishtowel have tags on them, so obviously never used, and the book looks unread. Later the bacon bowl turned up in a resale shop so it got added to the batch. 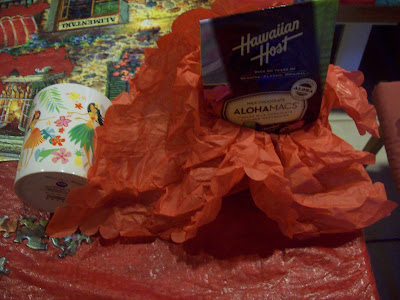 This is a small kind of joke present for middle daughter Mary and SIL Chuck, two Hawaii mugs from Goodwill and a new package of macadamia nut candy, to remind them of their honeymoon spent there. 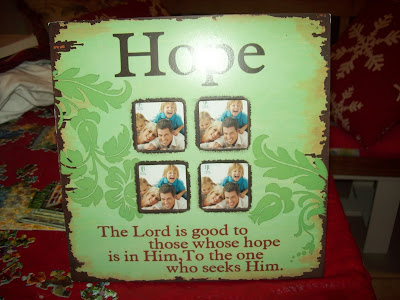 Lastly, this pretty picture frame for  Reverend Bobbie. The church I'm a member used to be called St. Michael's. A while back it merged with another congregation called Incarnation and the joint group chose a new name, Hope. 2016 will be the tenth anniversary of this event, so this seemed meant for our Rector. Other gifts are bought new, of course, but some of my favorite creative methods of wrapping have come from thrift stores, which makes getting them ready to mail or give fun.

That's it for me this week. Have a wonderful weekend!

Michele
Posted by Michele at 4:33 PM

Michele ~ love your finds! I have some family members who would LOVE the bacon shirt, lol! Have a wonderful weekend!

You found some great gifts and I'm sure they'll love them. That first picture is lovely and it looks ethereal.

I hope you have a wonderful Christmas, my friend.