Hello, all you Friday lovers out there. I hope your weekend has begun already.


We don't have many things from Mr. B's family, except for a chest of silverplate flatware that belonged to his parents and a mortar shell casing from WWII my fil brought back from the South Pacific. It stays in Mr. B's studio. The only other piece is this: 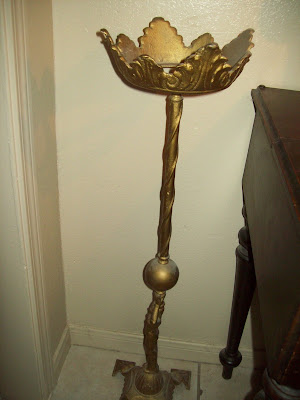 It belonged to his paternal grandparents. My fil, now 90, says it was always in their home, and that his folks repainted it so often he has no idea of what the original color was. It's iron, very heavy. The top part seems meant for a goldfish bowl, but that wouldn't work in our house. So, how about that perennial (pun intended) favorite: 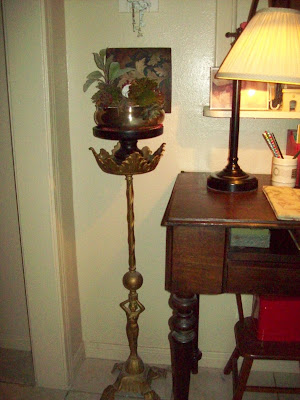 of fake succulents in a silver bowl? They're on a PB footed pedestal now. 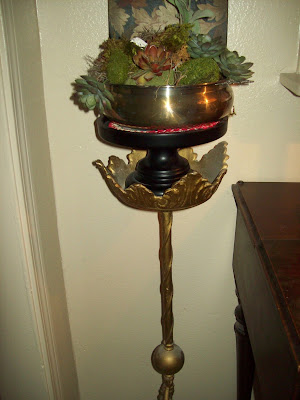 It's easy enough to check out the thrifts for another fish bowl and see how that looks with the succulents in it. The arrangement doesn't have to be in the silver dish, although it does have the advantage of not being breakable. So far this week the losses on the tile floors include an old refrigerator container lid, a pyrex bowl and glass over a photograph, so it is an issue to be reckoned with. 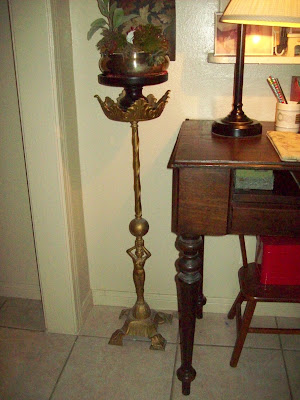 It fits well in that small space by the end of the desk, don't you think? How tired do you suppose that woman at the base is of balancing it all on her head? After a hundred years, she's probably got a pain in the neck no otc pill will even begin to help!

Have a wonderful weekend,

Michele
Posted by Michele at 5:20 PM