Good morning, and a happy hump day to everyone.


Monday was Mr. B's birthday, but he had to teach that night. Plus, the restaurant we wanted to go to isn't open on Mondays anyway, so there was a day's delay. We had been to this place before several times, but always during the winter and wanted to see it out during DST. It is here, called The Rainbow Lodge:
http://rainbow-lodge.com/

There is an exotic menu, featuring elk and buffalo as well as more traditional entrees, and seafood.The birthday geezer had one of the specials of the day, buffalo--or maybe bison, I forget--tenderloin served with fried green tomatoes on a bed of something else. I got the summer stone fruit salad which included peaches and nectarines, some kind of ruby lettuce, toasted almonds and feta cheese and along with that the crab cake entree, which was heaven on a plate.
Here is the room where we sat: 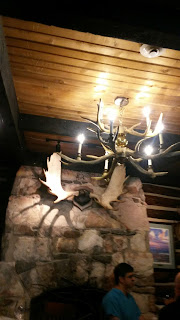 We were across from the fireplace near windows looking down to several decks. 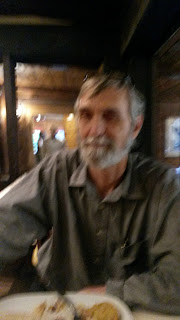 Mr. B. After dinner we both had fabulous creme brulee for dessert. 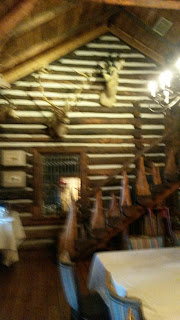 Sorry this isn't a good picture. The wood on the staircase was really cool and I was trying to show it off. It might be cypress. 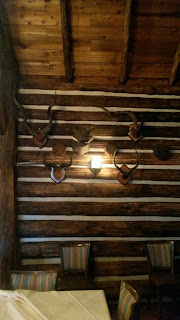 The venue is a warren of small rooms on multiple levels with a total lodge vibe throughout. 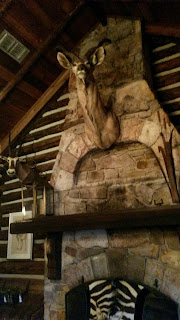 There are multiple fireplaces, too, which makes it very cozy and inviting during the winter. 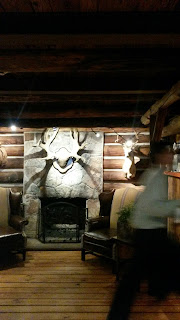 Another fireplace and set of giant antlers. After we finished we went through a door exiting from the bar to look at the grounds. 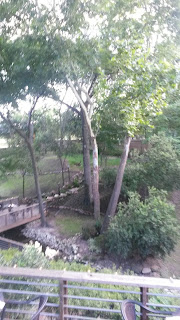 They are lush and beautiful. 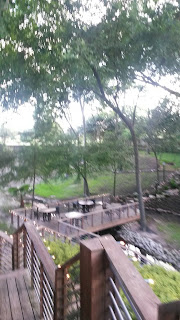 There are decks and bridges at different levels and spaces that would be lovely for an outdoor event. 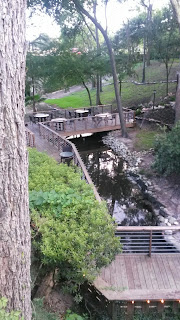 It's hard to believe this tranquil, verdant place is in such a busy urban area.


Obviously, the Rainbow Lodge caters to carnivores, but there is seafood on the menu too, and salads and vegetables for those with other tastes. Service is impeccable and there is always valet parking at night. We had a wonderful time.
See for yourself if you ever have the opportunity

Till next time,
Michele