We are at an in-between period. It will soon be fall on the calendar, but still hot here.
I like fall, but don't want to set that stuff out too soon, since we don't really do much for Halloween anymore, so it's a rather awkward period. When we were looking for the birdcage filled with  succulents stolen recently, Mr. B dragged this up from deep hiding in the plumbago and nandina. It seemed like as good a place as any to start to make a generic centerpiece. 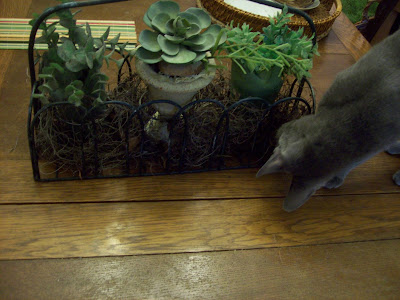 It's an iron container with holes for three pots bought at Value Village last year. Flossie is much enthralled with the smell of the Spanish moss in the bottom. 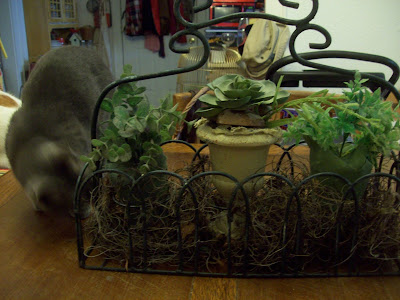 When using it indoors it's necessary to have artificial plants. You can imagine what the nosy parker in that picture would do to real ones. 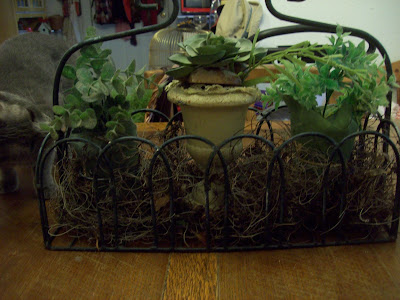 She only reluctantly tore herself away when one of the other cats spotted a flying bug of some kind; the hunt is on now.

What's doing with you as the Labor Day weekend is about to start? Plans to travel or entertain one last time before summer's unofficial end? I hope everything works out for what you need or want to do.

Have a good one!
Michele
Posted by Michele at 3:12 PM

Hi Michelle, I thought of you today when I fixed a sunflower centerpiece for the table!

I'm sorry your birdcage was stollen but I do love today's centerpiece. Obviously Flossie does too! I remember my mother always saying, "Don't send me flowers, Bebe (her cat) will just tear them up." I think we must have a strange cat. Sammi Gayle never gets on tables or bothers any plants or flowers. She has started being in our dog's nest so we have had to get rid of all of them and let Katie sleep on the sofa. I don't know whether she's getting senile or what.

Ever had a cat do that? Or you may not have had dog nests in the house!

This weekend our daughter and her husband and their two schnauzers are in visiting us, so our Labor Day weekend will be filled with lots of good talks and sitting around the table after meals. The best of times.

I hope you have a good Labor Day weekend!

Oh, Michelle, big goof in the comment above. To clarify--I mean to say our cat has started "peeing" in the dog's nest!