Hello, folks, how's the week rolling along so far? We are having near summer weather, but that's supposed to change in a few days, with cold temperatures and storms. It seemed like showing you how the fairy garden is celebrating before that happens would be a good idea.

I went out to decorate but was confronted by this: 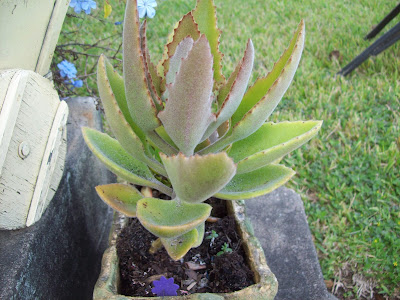 From a tiny plant in a one-inch pot, this succulent grew into a monster! It looks as if it's on steroids and was blocking the entire house, so moving it was the first priority. Here the giant is in a new location.

After that, it was just a matter of sprucing up for winter. 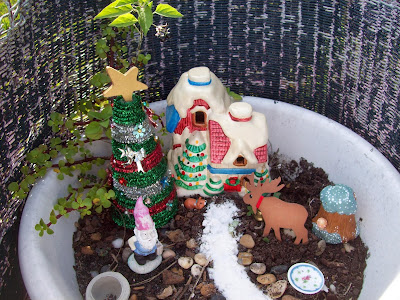 The gnome has a gingerbread cottage for a residence now, and there is a snow covered stump in his yard. His shiny, star-topped tree has attracted the attention of a visiting reindeer, which doesn't seem to scare the little dog lying by the doorstep. Looks like he's all set for the holidays, ready to entertain and enjoy the season.

Do you decorate doll houses or fairy gardens for different holidays and seasons? Since it's so much fun, it's hard to see how anyone can resist!

Catch you on the flip side,
Michele
Posted by Michele at 6:32 AM

So cute, Michele! And I know you had fun setting it all up! You need to invite some children over to see it.