Sorry for being AWOL, but I'm having a hard time adjusting to 2014. Between extra cold weather last week, two celebrations between Monday and Friday and trying to get used to Windows 8, my brain about seized up for good. However, I'm hoping to do better from now on.

Although the picture at the top of the blog hasn't been changed, there are a few others around here, notably in the Fairy Garden. It looks like the gnome has decided to roam for a while. He left a pretty fairy to house sit for him: 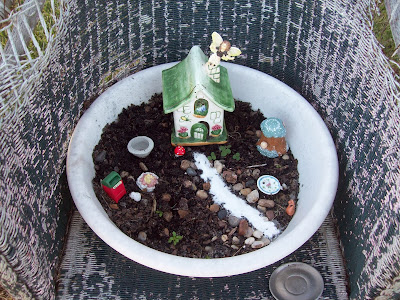 Here you see she just flew in and is perched on the chimney, perhaps wondering if she should stay or not. 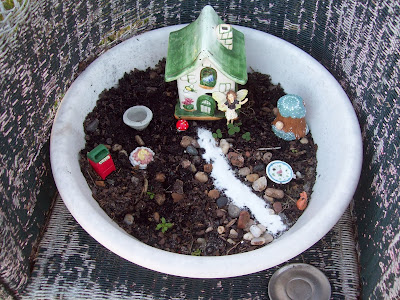 Now she's standing by the front door; that seems like a good sign. There is a new mushroom that's popped up to greet herand the little dog stayed behind. 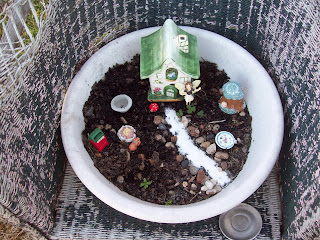 The neighborhood has also acquired a mailbox and she has a little fire pit for chilly nights; really, along with the birdbat and little table, what else could she ask for?


This is a small Cicely Mary Barker Flower Fairy ornament found in a bag of assorted things at a local thrift shop recently. The gnome took such a beating from the sun he's in need of re-painting in the worst way. It is wonderful to have pleasant weather now and be able to spend a few minutes outside without being miserable. Yes, Texas weather isn't even considered cold by some of you who live farther north, but think about it--if we live for months on end with temperatures over 95 degrees day in and day out, getting to 25 is a huge shock to our systems!

May your week be off to a good start and only get better!