I thought I'd show you a few things bought recently. 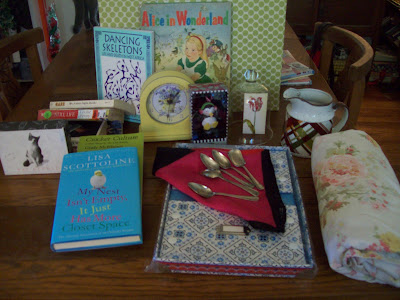 You see books galore and a nice flat sheet
A box and a pitcher and spoons so sweet
Kitty note cards, a cloche like a bell,
A scarf and a penguin and book mark as well
Clothes not pictured for both me and the mate;
Shopping last week has been pretty great!

Thus ends my tribute to April as Poetry Month.

Actually, some of these things are pretty cool. There are four silver plate grapefruit spoons and a sugar shell, made in England. Those were from the .49 cent bin at Salvation Army, less a 25% discount. The scarf  is silk and was made in Italy for Saks Fifth Avenue. The scarf and spoons are on top of a box, which has a pretty  blue and white print pattern with a label holder on it. It is knocked down, like a flat pack from Ikea. The clock is by Marjolein Bastin, and there is a new in unopened box ornament by Mary Engelbreit to come back out in December. 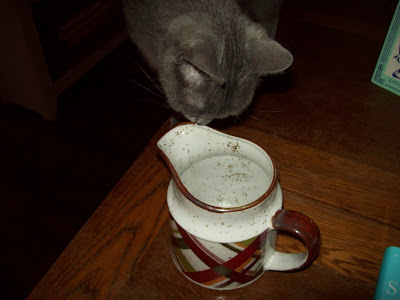 Flossie checked out the pitcher. 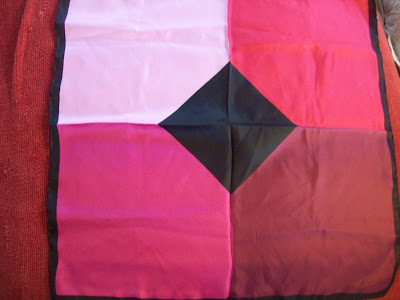 Here's a better picture of the scarf. 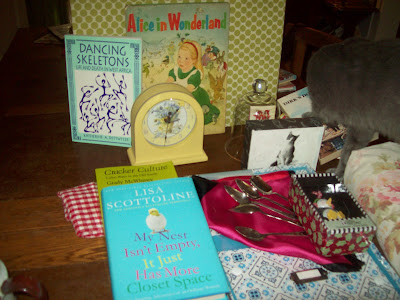 There are two cork squares covered with a lime green dot print fabric that were .60 cents at Sand Dollar. Under the cloche is a magnetic book mark with a picture of a tulip on it from the Metropolitan Museum in NYC that was inside a book, discovered after getting home. The copy of Alice in Wonderland is from 1955 and has beautiful illustrations by Marjorie Torrey. Another shopper at the SD said she still has her copy of that edition and still loves it 50+ years after receiving it as a gift. 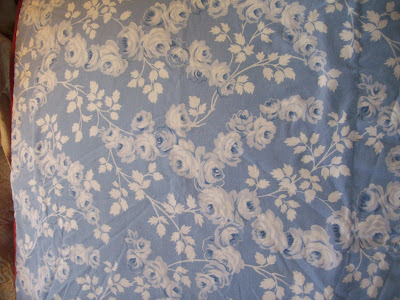 Value Village offered this Martha Stewart sham for .80 cents, and two by Ralph Lauren in a plaid fabric: 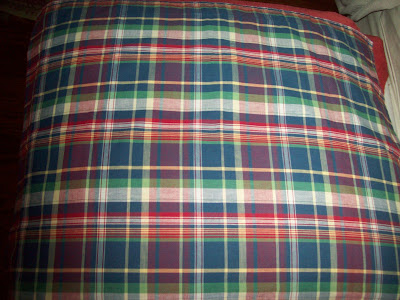 That was also where I found a pair of pants in my oldest son's size--not easy, since he's short--but not why they went into the cart. It was because someone had written in permanent marker on the inside waist band "Cameron"; how could I pass up britches with his name on them already?

How are your spring exploits so far? Any special treasures to report?

Till next time,
Michele