Well, hello, November! It's not nice  to sneak up on an old lady like me.

Here's a look at my recent haul: 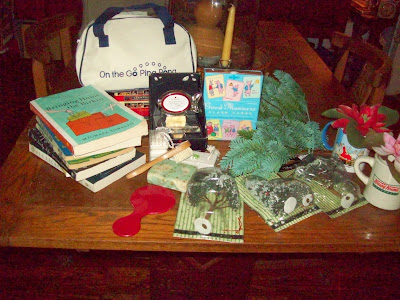 There are a couple of mugs for resale, one Krispy Kreme, one Gary Larson Far Side. In the left of center are items from a bag of stuff together, a mirror, face scrubber, pumice stone, and two kinds of peppermint soap. All were new except maybe the mirror. Behind them is a new in box ornament deal for my
middle daughter who recently got a kitten. It says "Kitty's First Christmas".
Three unopened bottle brush and other snow covered trees for holiday vignettes and again from a bag, a whole bunch of artificial  fir sprigs, ditto. The blue box near the middle is flash cards to learn  good manners by eeBoo. There is a small stack of books from Value Village today; it's too bad there aren't many because they were all 12 cents with books half off, but that was all I found. Behind them is a new with tag portable ping pong set that was a steal at $3.00 on Salvation Army's senior discount day. In the bag with the fir sprigs were a couple of flowers, but they look very tropical and summery, so won't be  used anytime soon.

That's all for the past week or so. Tomorrow is a library sale, so I hope we find tons of good stuff there. And who knows, it's way across town so maybe we'll see a garage  sale or two while we're out and about.

In the evening is the Day of the Dead reception at Casa Ramirez, so we'll go to that as well--super active Saturday for such normal sticks in the mud!

Have a great weekend!

Michele
Posted by Michele at 4:29 PM