Here it is Friday again. How did that happen? After being gone till afternoon on Thursday I've stayed around the house on Friday. It is supposed to be 100 today and feels as if it's already gotten there.

Since there was cooking and laundry and other messes to eliminate my creative efforts are on the modest side. I put something in a new frame from Manna that had been left empty for a while and re-vamped an old photograph. 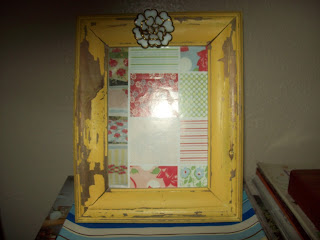 When I say new that means it was still in the box, unopened. The combination of distresed yellow wood and the mother-of-pearl look flower appealed to me. 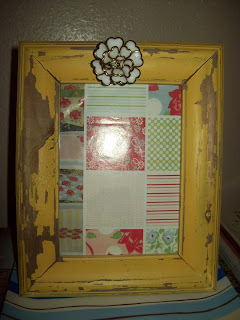 Here's a better picture of the contents. The page reminds me of a quilt. 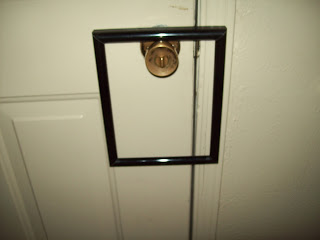 This had a matted photograph of my oldest two offspring in it until a cat knocked it on the floor and broke the glass. Sigh. 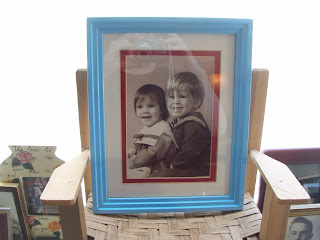 I decided to go with lighter and brighter, but kept the mat with the red inner line. The frame had a couple of dings on it, but a quick touch up with the same color spay paint fixed that. 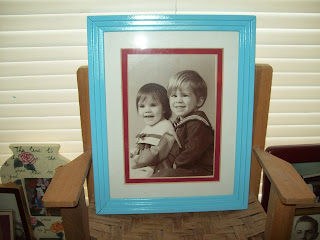 Pretty cute, huh? We lived in Cincinnati then. There was a Polly Flinders dress outlet in an office building downtown where Hilary's dress came from. Cam's sailor suit would never make it to the sales floor today, since it came with a wooden whistle on a cord, both a strangulation AND choking risk in one small accessory! He loved it and managed to survive the hazards of living in the bad old dangerous days around 1970. People weren't nearly as alert to hazards as folks are in 2015. The aqua frame is a fun switch, so maybe there's no need to be mad at Bitty Kitty anymore. Do you ever change your photo frames around, or have you abandoned hard copies entirely for digital albums?

What a darling photo of Cam and Hilary! He looks adorable in the sailor suit, but you're right about the whistle never making today. We had a Polly Flinders outlet in Tallahassee, and Rachel wore many of those cute smocked dresses.