I hope your week is going well. Monday I thought about changing the locations of two items that were the same function but with a different design. Tuesday an idea came to me about how to better store trays used in decorating more efficiently. A couple of times I've forgotten where a particular one was because they were stashed in locations all over the house. Acting on directions in the Marie Kondo book about organizing, I got all the trays in the house not on permanent display or currently in use and took them in the living room. Under the coffee table was this:

This large basket is from Ikea and originally had a handle. It was removed a few years ago and casters put on the bottom so it can roll easily. Now there is: 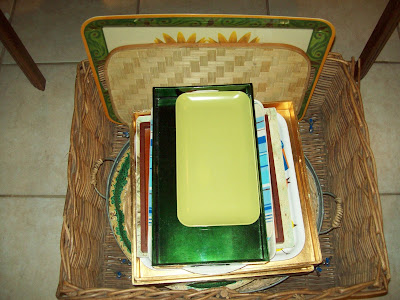 After having second thoughts the final result was this: 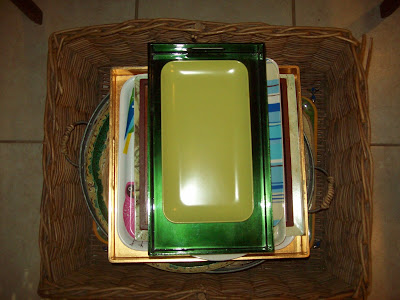 Not only will this be handy for finding a particular style or color, it doesn't look messy on the rare occasions we have company sitting in the living room. There you have it, two inspirations in as many days. On a roll here!

Have a good one!
Michele
Posted by Michele at 9:52 AM