Sliding in at the last minute with a very small effort to report. Recently there were changes made in our kitchen because we bought a new, larger microwave. It wouldn't fit on the small shelf Mr. B hung (poorly!) over the  stove. 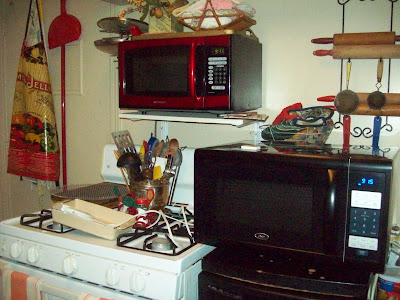 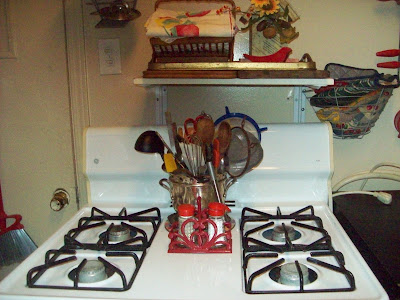 Here's the after. This photo doesn't show the large blank space that up to now was unseen because of the microwave. Meanwhile, for several years I've had: 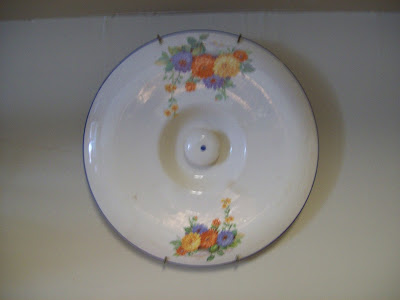 this vintage casserole lid. It is thick and heavy with a blue line around the rim. Look at those sweet flowers! No, we don't have the dish it came from, but for .90 cents at Sand Dollar, could you pass it up? I didn't think so. It occurred to me, why not kill two birds with one stone? Put it out where it can be admired and at the same time, take the curse off that blank wall over the shelf? Thus, we now have: 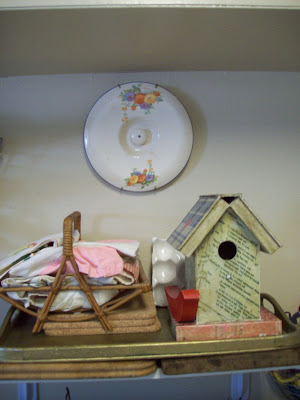 A small but effective addition, don't you think?

Gotta go, there's a meal to fix so Tim won't weep and miles of floors still left to sweep.

Michele
Posted by Michele at 4:35 PM

I think it looks cute there and I can't pass up mismatched things either ;)

Clever idea! The lid IS really cute -- so much nicer than a plain lid would have been.